Too long since I had cracked open a middle grade novel by
Patricia Reilly Giff who I met with her Irish potato famine tale,
NORY RYAN’S SONG, which taught me much about my Irish heritage.
This author of more than 90 books for children including
two Newbery Honor titles offers a new one at the end of summer.

Fortunately for me, UNTIL I FIND JULIAN is on a topic I glom onto in
headlines and book titles.
Here in Florida, like in Texas, New Mexico, Arizona and California, we feel
immigration pressures directly at state borders, which unlike, say, Wyoming,
are also international/national borders.

MATEO-MATTY
Mateo, who must take on the Americanized name Matty,
in his parched journey north, is the sort of child anyone would like to
have doing chores such he handles for his mother, grandmother & a man who
befriends him later when he is far from home.
Matty has an artist’s eye & he loves the hand-stitched notebook his grandmother
created – maybe more than her hand-stitched quilts.
Older brother Julian has covered for Matty’s mild mistakes, such as
skipping school to fish & has also shown him how to be kind to the eccentric
woman who lives down the creek.
Now Julian, eight years older, is missing in Arkansas. He was working
odd jobs illegally, to send money back to the impoverished Mexican family.
Word has come back to the family that he may have been injured in a fall
from a construction site.
Matty’s quest begins. He finds a disreputable man to help with the trip.
There is a river to cross. And despite living by a creek, Matty can’t swim.

Memorable moments –
“I kick against the fast moving water, my legs deep under the surface.
Head up like a turtle, I keep my eyes on the island in the center of the river.”
Sidekick moment – Angel, a runaway girl, guides Matty into the U.S. after
he escapes from the human trafficker. She hides sad secrets
that Matty tries to fathom.
On the hunt – Julian is like a ghost, tracked by Matty from one fleeting jobsite to
another in Arkansas, each step dangerous for the younger brother; he has entered illegally & is a child who speaks very little English. How can he “pass?”
Bonus – Because Matty has always dreamed of publishing a book some day,
he manages to take a few notes on the journey. His writings are included,
throughout the novel as, “I Remember.”

I can see great classroom connections for this vivid story of Mateo-Matty, Julian & Angel. Look for it in September or
pre-order now at your favorite bookseller or from the publisher.
About Patricia Reilly Giff
I imagine there will be more conversations near the release date, but here
is an interview in The New York Times by Tammy La Gorce in 2008. 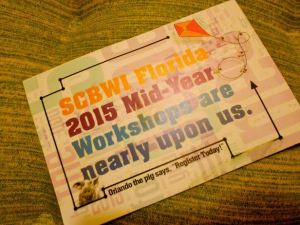 It was my honor to win this book as part of the Florida-SCBWI MidYear conference. Thank you!