WHAT stories for young readers have hurricanes as the backdrop? We can always react to a seasonal interest with out of print books such as Hurricane Luck by Carl Carmer.  A review of the Katrina-inspired A PLACE WHERE HURRICANES HAPPEN, from Renee Watson in 2010, is here.

And thanks to the timely comment (see below) I’m pleased to post a link to a review and comment  on a new hurricane picture book,  A STORM CALLED KATRINA by Myron Uhlberg, with  illustrations by Colin Bootman.

For my current hurricane reading, I am taking cover against predicted rains from Lee, in the classic 1958 non-fiction from the Everglades’ protector, Marjory Stoneman Douglas.

YURACAN is only one word for the worrisome weather.

To fathom hurricanes, Marjorie Stoneman Douglas studied them for three years in league with the (old) Hurricane Research Project of the U.S. Weather Bureau, Miami.

As we seek from a legendary writer who herself was a force of nature, living until 108, her quest resulted in goodness – a 393-page nonfiction literary volume, HURRICANE.   And yes, the view of destruction on the back cover from my own prized volume is a blurry image from Montauk, Long Island.   So this older book has resonance for today, what with the recently departed H. Irene having discombobulated family & friends in New England.

I recommend the Douglas history of these killer cyclones. It is a keen read, especially for those recently/currently acquainted in a personal way with one. Some dear family &  pals went for days – almost a week for one family, without power.  So a history of indoor plumbing & the shower is more appreciated than ever in these times. But that’s another book.

Also, I can’t talk about hurricanes without sending you to read up on book loss at libraries, as a result of Irene. Be generous if you can, starting with information from an alert & talented author, whose pages I traveled to via an indispensible blog at  School Library Journal.

HURRICANE was first published in 1958. Douglas reports on a 1464 hurricane that dealt a coup de grace to Mayans.  She sails on from there, dropping anchor for interesting ports of call such as : “In 1790 on his trip down the Ohio, George Washington noted hurricane damage to the trees between Steubenville, Ohio and Wheeling, West Virginia.”

Her book reminds us/introduces us to Yuracan & other suspected sources of our term, hurricane, including the Indians we know as Caribs, the island dwelling Tainos  and the good people of Central and South America.  Her recounting of the beliefs about the gods of wind and storms fascinates.

Douglas also covers geography of past destruction, including a detailed section & maps of  “Hurricanes, North.” So the possibility of Irene’s interesting path away from Florida and up into the rivers of Vermont may have come as no surprise if we read our history, which of course we do, correct? No, not nearly enough. 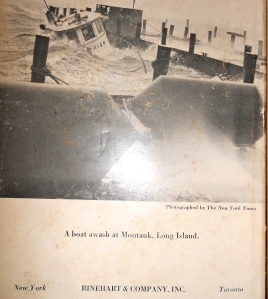 from HURRICANE by Marjory Stoneman Douglas "A boat awash at Montauk, Long Island - photographed by The New York Times"

One of my favorite aspects of this book involves the stories of heroes who risk their lives to save people from injury and death as a result of hurricanes.

In looking backward with Douglas, it is clear how today’s forecast information, which, let’s be honest, we take for granted, would have been worshipped, cheered, embraced & yes, well-heeded in times past.

To not follow it today seems without enough regard for the first responders who can risk their lives in hurricane-affiliated rescues. And some of those stressful storm-soaked saves may be unnecessary, if only said stranded residents had heeded warnings.

We know much more about inevitable hurricanes today, than when Douglas wrote beautifully on them with that era’s limited knowledge, some 50 years ago. So this makes me ponder: What makes sense about new construction or rebuilding, in marshes, on riverbanks that flood hugely after strong sustained storms, on our coastal sands,  & in similar zones?

Despite the heft of this book, it is a fast-paced read. Especially in hurricane season, which lasts, I recall, through October.

It was reissued in 1976 and if you are pondering which library near you carries which edition, a fast way to look is with the wonderful World Catalogue  WorldCat http://www.world.cat.org

Full disclosure: Douglas personally charmed my reading club during her long visit with us, captured in a photograph of her on my sofa. I am in touch with most book group pals, but if I haven’t heard from you in ages, please give a shout.  I don’t have a functioning scanner at this moment but do want to get that photo up here. Please check back after the next few hurricanes! I expect to have it posted then.

In the meantime, check with your Red Cross folks, follow the forecasts & take a look at hurricane books.

Publisher of Stories for Children, Teenagers, and Families

The Writer's Resource for Jewish-themed Story: Fiction, Nonfiction, and Poetry