In October I didn’t discern that my neurons held an idea for a particular strong new mystery character.

That was well before the accumulation of the mini-marathons that 30 days of NaNoWriMo in November ushers in, at least for many writers. This year for it, I nested online in a community of keyboarders.

NaNoWriMo is a phenom that almost every writer I speak with knows about, even if participation isn’t part of their plan. Some fortunate writers who I’m cheering on with long-range  agent &/or editor hopes for their just-completed novels, holed up at a delicious island, supported by cooked meals, the swish of salty air, and the focused attention of an award-winning author who dishes kindness with criticism. Brava! I was with them in spirit. I crafted a NaNoWriMo for myself, uplifted by hardworking NaNoWriMo organizers locally. My municipal  liaison coach hand-made an Origami guide for each writer & treated us to an outdoors kick-off party. This was a sweet surprise & set me typing, typing, typing. 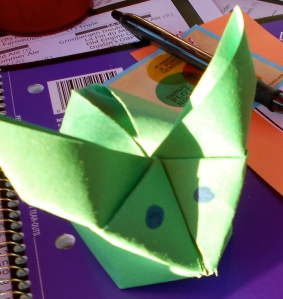 I became the only writer in the entire contest assisted by Ginger, a feline who has nevertheless seen too much for his liking, of vets lately, but he’s fine, just finicky (yes his “Ginger” name is also a story.)  Perhaps the blog of this author who I’ve enjoyed studying with, a visiting professor,  helps explain my absence at our area NaNoWriMo write-in events. I did attend the kick-off party, channeling Big Bird.

As a result of the energy from my NaNoWriMo team I have met my character, saluted her perfect name, & wondered over her dreams & her problems. Of course when I return to this manuscript-in-progess some other month, my character Sara may become Penelope Pennypress. And her dreams and her challenges will morph. And that will be a good, good, thing.

I didn’t exceed my goal, 1,000 words a day –  or even match it. But no complaints. In November we traveled far, beautifully celebrated our 25th anniversary, attended to some key family details that also involved out-of-town visits & noshed on an early Thanksgiving with our out-of-town college kiddo. I tackled writing details such as doing the Snoopy dance for finishing & sending out to a contest, chapters in a mystery for young readers & I organized my first blog hop with book topic Qs & As; it begins back here on Dec. 5.

What I’ve begun writing next is the Thanku poetry form. This one is for NaNoWriMo.

A Thanku is a Haiku of Thanks. The Thanku is one of a multitude of plum-perfect ideas to find at Teaching Authors. Say Thanku out loud to fully appreciate the term. Here is my most recent Thanku.

I hope you will return here WEDNESDAY, Dec. 5th for the tag-team Q/A blog hop. Creative folks I’ve tagged who expect to run their Q/As on their blogs, on Dec. 12 will have their links on-board then.

Maybe Ginger’s NaNoWriMo keyboard technique will give you a hoot.

With the wee drop in temperatures in North Florida,  I sense a tempo  leap.

And so matching that, I am almost completed with revising a chapter book.

On a new project, I touch the word count bar to see how far a new story character and I journeyed in one day. I read a mistake.

It can’t be 2,600 words. My legs were stiff when i pushed away from the keyboard for the last time yesterday. So they also say it is true.

If you wonder about working with the community that is National Novel Writing Month, which helps develop dreams of story creation, it’s not too late for 2012. And anyone can use the group’s model to make a better month for you, your personal NaNoWriMo. 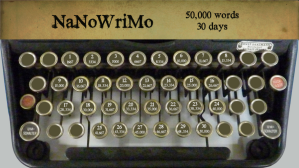 From the Dublin, Ireland, Library

I met up with a NaNoWriMo crew at a kick-off party. The construction paper origami guide given to each hopeful creator observes me now on my desk.  When I want to stray,  origami bunny is a tangible reminder of the 1,000 words a day I want.

Thank you to our thoughtful  NaNoWriMo folks.

For this nation’s month of Thanksgiving, I fill  with gratitude to live so well in this FL latitude.

Hurricane Sandy raked over the New Jersey beach, Seaside Heights, where years back I regularly rolled down dunes and got sick stuffing my mouth with a bag of salt water taffy. Dear family members are still without power at the CT shore – it may be a week or longer, but they are safe & nestled with another family member. Family members living near  Narragansett, RI are also fine. Extra thanks given with the turkey, in November 2012.

Before I scoot away during the rest of these 30 days, I share titles of good books for younger readers, about American indian/Native American topics.

November is the month more than any other, when we celebrate this continent’s First Peoples.

Beyond  the high quality of these picture books they share an additional crucial element. I hope you can discern it through my mention of them here.  You may also want to visit the Oyate and American Indians in Children’s Literature resources, for insights that deepen our connection to this month. Thank you.

SQUANTO’s JOURNEY, THE CIRCLE OF THANKS, THE FIRST STRAWBERRIES, THE EARTH UNDER SKY BEAR’S FEET by Joseph Bruchac (Abenaki)

In her book RADICAL REFLECTIONS, the incomparable children’s author & educator Mem Fox, of Australia, (the creator of KOALA LOU) says that she gets, maybe, four good ideas a year in writing for children.

This cheers me up because, in calculations for my warm fuzzie for the just-ended National Novel Writing Month 2010, I have to ask:

Have I measured up to my goals?

Saturday evening our pals GiGi & husband Jerry came over straight from the airport to endure my spaghetti & meatballs after their day-long flights home to North Florida from a Thanksgiving in NYC that collected their family from hither & yon.

They are good story tellers & their tales helped distract us from the fact that the best teen in the universe, home for Thanksgiving from her first semester of college in New England, had just flown northward that day.

“How did you do with your writing,” GiGi asked me. They had been over for brunch at the beginning of the month & I had announced my goals as a Picture Book Rebel in NANOWRIMO 2010:

a picture book idea, a day

To put the screws in tight, I had also, impromptu, announced this during the Author Panel, Elementary Section, at the Florida Association of Media Educators 2010 conference, conveniently held in November .

Here’s where the four picture books are:

A story about the origins of a favorite food – writing begun & pages to date – three- ready to read to crit.crew.  The research tastes yummy.

A p.b. biography  about an abolitionist – writing revised, after a hiatus of three years – not quite ready to read to crit. crew but 7 workable pages nailed.

But Fourth, Unwritten P.B. is 1 of 23 new p,b. ideas (not 30) that I came up with, which are ready for this Thursday’s meeting with my crit crew.

I have taken my victory laps around the neighborhood on my daily walks.

This would be a I Wish I Could… instead of an I Did!   had I not ponied up, got my NANOWRIMO halo & publicly announced goals. AND the best part of this month was written by someone else.

Jane Yolen (TOUCH MAGIC, one of her books about the craft of Story, great for readers & writers) an incomparable talent of the world, who can’t be categorized, only, as a writer for children, although that is how I came to her, sent me a new, unpublished poem early each morn, which she penned or penciled or keyboarded, each day of November.

She did this as an advocate for The Center for New Americans.

Her poems sailed out to fulfill her November writing pledge.

It was to create a fresh poem each day, delivered privately for personal use only, to the luckies who pledged in turn, to donate to The Center. I thank my critique partner M.R. Street for her graciousness in alerting me to this.

Do you follow tennis?  Imagine if Chrissie Evert shows up at your doorstep, to show you her swing.

Have you prayed for racial strife to end ? Imagine if you answer the knock & meet Desmond Tutu, there to bow his head in prayer with your family.

Well, this is November  2010 for me.  It’s been birthday & anniversary & Easter & Christmas & New Year’s & like my first successful bike-riding moment at age 8 (“You’re a late – bloomer, Jan,” a newspaper editor once told me) & events of similar good force. In one month.

In 30 days I could fall flat

Or I could soar.

It’s up to me to open the door.