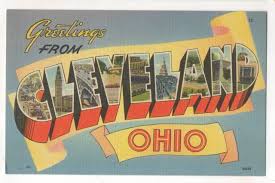 Although I have personally owned, cared for &
several times have relocated during moves
between New England & Florida, a classic
large letter, linen, collectible CLEVELAND postcard,
I had never before considered
the Rock & Roll Hall of Fame City,
across shallow Lake Erie from Canada,
as a desired destination.

But now I add in CLEVELAND to my list of places rated.
Cleveland joins
3 months in Costa Rica
a season in Arizona
many US cities/states, including hikes up & down Mt. LeConte & Mt. Katahdin
some of the British Isles
Sicily, mainland Italy
Cayman Islands
Canada east (New Brunswick, Nova Scotia)
Canada central (Montreal, Toronto)
Canada West (Vancouver Island)
as top travel tickets that I recommend.

The deal with this unanticipated vacation is
I give Cleveland my kidney;
Cleveland gives me world class health care
in the taking out of it,
with the healing up of it
& so forth. 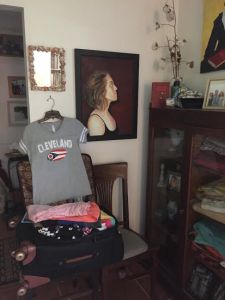 Kidney Limerick #1
There once was a kidney named Right
who tried with all of her might
to filter and function
at her grand junction
but still was not working right.
– c.2018 JGA

When my family & I realized I needed serious
up on the slab in the lab
surgery we selected Cleveland Clinic,
thought to be #1 in patient-rated trust/satisfaction
for reaching into those
urological netherlands.
We are pleased so far with the world-class
attention, education & care in pre-vacation,
er,
pre-operation events.There are a crew of Clinic
people to praise & also, a most accommodating
staff at the campus Holiday Inn in CLE,
as we who have come to appreciate the city
call it & also a most accommodating
car ride service recommended by the Clinic.
My chipper cheer squad is
my nurturing family, Paolo, Anna & Petar.
Although it may be a full moon before I post again,
please know that I welcome
a Cleveland Clinic experiences
b Cleveland experiences
c kidney humor (see friends’ limericks below)
d your private prayers, vibes, chants & spells

Han Nolan Kidney Limerick
There once was a kidney with a tumor
Who had a great sense of humor
when operated on
It was already gone
Its presence merely a rumor
c. Han Nolan, 2018

Hillary Homzie Kidney Limerick
There was once a kidney
Named Tim
Who really knew how to swim
When he jumped
In the bath
he made quite a splash
And now pools are named after him.
c.Hillary Homzie, 2018

Adrian Fogelin Kidney Limerick
There once was a kidney so lazy
it drove the other one crazy
said K2 to K1
your job here is done
I’m tired of your lounge-about way-z.
c. Adrian Fogelin, 2018

There once was a woman named Jan,
For doctors she wasn’t a fan
But her kidney revolted
The Doc said, “It bolted!”
Now Jan is ready to plan
c. 2018 Carole D. Fiore

There once was a surgical scar
That could be seen from close and afar
But the patient behaved
And now she is SAVED!
And the scar left the scene by a car.
c. 2018 Carole D. Fiore

There once was a kidney named Kate
who came to the party quite late.
She made a big splash
but then had to dash
for a surgical meeting with fate.

When faced with a surgery scare,
Jan met it with humor and prayer.
Her doctors were awed
and would wildly applaud
when she sang with “exhuberant” flair.

15 thoughts on “My Vacay, CleClinic Way”